Choosing a guitar that has a neck to suit you is an important consideration. Guitar necks will vary considerable in their design betwen one make of guitar and another and will have a significant impact upon the feel of the guitar to play, style of play, and an influence upon the tone of the instrument.

Guitar models will have necks of different lengths and this can make a noticeable difference to the feel of the guitar to play. The length to take into account is its ‘scale length’, which is not the length of the neck from one end to the other. It is a measurement from the saddle on the bridge to the ‘nut’ situated at the headstock end. (The nut is the slotted piece through which strings run, before the first fret, and the saddle is what the string sits upon as it leaves the bridge.) So it is really a measurement of the strings maximum vibrational length.

If we take as examples two well known guitar makes, the scale length on a Fender, such as a stratocaster, or Telecaster, is 25.5 inches and on a popular Gibson it is 24.75 inches. As a consequence, and a key thing to note, the frets are more widely spaced on a longer scale neck than they are on a shorter scale neck. Not only is the difference noticeable in terms of how the neck will feel to play but a difference in tone is also noticeable. This is because the strings on a shorter scale neck will have less tension in them when reproducing the same note played on a string of longer vibrational length. On a short scale neck, the strngs will feel slacker and the tone deeper, whereas on a longer scale neck the strings feel tighte and tone often described as crisper.

The shape of a guitar neck’s profile can be considered in terms of its curvature of front and back. This shape will have an affect upon comfort of the neck in the hand and, to some extent, an implication for the style of playing to which it can be best suited to also. The rear of the neck can be deep or shallow and three typical profiles have evolved. These are refered to as ‘C’ shape, ‘U’ shape and ‘V’ shape, where the letters are themselves illustrative of the shape implied. ‘D’ is another example. The most popular profile of guitar neck today is the C shape. As a rule, it’s a reasonably comfortable standard and therefore fitted to most models today. Older guitars necks, refereed to as ‘vintage’ necks, preferred by the author, tended to have a ‘U” shaped profile and you can expect to find these on a re-issue model, though perhaps less deep deep some have noted than on the originals. Similarly the ‘V’ shape necks were an earlier design which is sometimes available on guitars today and for which a hard and soft version exists which gives an indication of the sharpens, or severity in the angularity of the ‘V’. It depends really on what you find best fits into the palm of your hand and the ‘C’ shape, found on most necks, is usually fine. In addition to these mentioned above, the rear a neck can also be asymmetric, having one side thicker than the other to sit gently in the hand.

Guitar necks vary in width among different models and types. The width generally quoted is that at the nut, the first fret region. Fender electric guitars usually have a neck width of around 1.65 inches (42mm). Necks on, Gibson guitars, for another example, are usually a little wider at 1.695 inches. A standard classical guitar for comparison is around 2 inches in width at the nut. Peference would take into account comfort with regard to size of hand, length of fingers and style of play. Generaly, and perhaps not surprisingly, its easier to play faster notes on a slender neck and with a wider neck it is easier to avoid unintentionally muting strings.

The neck radius refers to the amount of curvature, or roundness, in the fretboard and
this can vary significantly. If you think of curvature as the perimter of a circle then the shorter the radius of that circle the steeper the curve at its perimeter and therefore the greater the curve of fretboard. The tendancy for contemporary electric guitars today is to have a fairly flat neck. ‘Vintage’ or early Fender guitars, particualry those in the 50s, had a radius of 7.25 inches whereas a modern day standard Fender Stratocaster, for example, will have a radius of 9.5 inches. A neck of vintage radius will sit quite nicely in the hand for playing chords, and I find soloing also. Gibson guitars have a fairly flat radius of 12 inches and latter day guitar makers, such as Ibanez, Jackson and Warmoth, whose instruments have a close correlation to heavy rock, metal music etc, have in their range guitars with a radius even flatter still, up to 16 inches. PRS guitars similarly have a neck of shallow radius but this varies more moderately between 10 and 11.5 inches on different models. Warmoth, like Jackson, produce guitars with a ‘compound’ radius which is one where the neck tapers respectively from 10″ to 16″ in the case of Warmoth and 12″ to 16″ in the model made by Jackson.

The reason for these flatter necks is that the ability to ‘bend’ notes is more limited when the fretboard is highly rounded because the ringing of such a note is likely to be stunted when the string meets another fret. The action therefore (the distance between string and frets) can be set lower on a flatter neck which not only eases play and facilitates extremes of bending but also speed – a factor some players and their music require.

The fretboard, or fingerboard, on most electric guitar necks are made with either Maple, Rosewood or Ebony, usually with another wood backing it, usually either Maple or Mahogony, to form the overall shape, but not necessarily. The neck, including Fretbard, can be formed from one piece of Maple. As a player myself, familiar with each type of neck, I can tell there is a difference in how each feels to play. The Rosewood somehow feels softer than the maple and Ebony necks even though each are hard woods.The Rosewood also feels more ‘oily’, perhaps because the Maple necks tend to have a lacquer coating so you are not so much in touch with the wood itself. Comment abounds as to the tonal influence that the chosen wood of each fretboard brings, though given the intricate subtleties of other factors that combine to affect a guitars tone, notably the timbre in its amplification, I do not want this page to add any further vaguely upon the subject.

Now we are entering another area of personal preference for most guitar players. Frets come in a variety of shapes and sizes, narrow, medium and wide (Jumbo), not to mention height. Earlier guitars were made with the narrow, or ‘vintage’ fret wire. The wider frets do actually make the guitar easier to play and also facilitate faster playing because they require less pressure as the fingers move from one position to another on the fretboard. Wider frets also have the advantage of offering more metal with which the sting can make contact with the guitar. This would be a factor in a strings vibrational quality. Some well known electric guitar players are noted for their favouring of jumbo frets, such as Stevie ray Vaughan and Rory Gallagher, sometimes replacing the vintage fret wire used on their original, vintage necks. For most, the standard or medium gauge is fine.

The frets themselves are generally made from brass (mostly) with nickel added to create the look of silver. These are quite hard wearing though and considered a good choice of balance between use and durability, though with lots of playing action they’ll probably require replacement during the guitars lifetime. Newer stainless steel frets are emerging though these are not the norm.

Besides a neck’s scale length, you also find mention of ’21 fret’ or ’22 fret’ neck models of guitar. This refers to the total number of frets the neck has. Earlier fender models originally had 21 frets and later models 22. Today either are readily available, one reflecting the vintage original character and the other a modern choice. Gibsons have 22 frets. Other makers have produced guitars with 24 frets such as PRS (Paul Reed Smith) guitars and their model for Carlos Santana.

This is the location of the tuners and forms a decorative attribute to the guitar.

Tuners, or machine heads, have changed in design over the years but many of the features of the early models are still available. Having chosen your guitar, the choice of tuner would realistically be those fitted by its maker. Leading names in guitar tuners are Kluson, Schaller, Grover, Gotoh and Sperzel and their products have been variously fitted to leading guitar models. While choice of tuner manufacturer has fluctuated, the styles selected are synonymous with the following guitars:

How the string is fitted to the machine head can be of value and interest to mention. In vintage Kluson tuners for example, those fitted to the early and reissue Fender modles, the stirng would be seated in a slot down the center of the spindle before being wrapped around it. Later spindles would have a hole in the side through which to thread the string.

A number of different tuner manufacturers are available with different designs that can be fitted to your guitar. Some examples are:

Tuners are also available that can be locked to stay in tune. These will be found fitted the the Fensder Stratocaster Plus, for example.

The example of a locking nut shown here is made by Schaller:

The neck of the guitar is under considerable stress, caused by the tightness of the strings which give a pull of around 150 – 120 pounds. Being wood, it could bend and bow under such conditions. To deal with this, most guitars have an adjustable metal truss rod embedded under the fretboard and that runs the length of the neck to compensate. If it is necessary to have this adjusted, it is advised to have it done by a professional guitar tech.

Access for adjusting the truss rod of this Stratocaster is available at the headstock end.

On vintage necks, the adjustment would be at the other end of the neck.

Attachment of Neck to the Body of the Guitar:

There are three ways of attaching the neck to the body of an electric guitar. It can be bolted on, as with most Fender guitars, glued on with a tenon joint, as with most Gibson guitars, or a neck can be made as one piece with the guitar body. 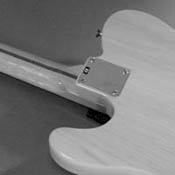 Telecaster showing the plate bolting the neck to the body