One essential feature all electric guitar bridges share are the adjustable ”sadlles’ upon which the string rests. This enables fine tuning whereby the length of the string can be adjusted to vibrate at the correct pitch. The amount of adjustment, forward and back, depends upon different gauges of string and different sizes of fret. Each saddle can have is height adjusted also. 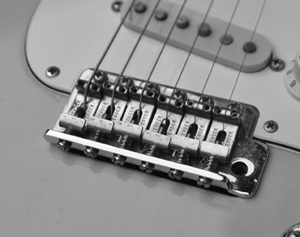 Vintage Stratocaster Bridge style.
A temolo tremolo arm is fitted in the hole to the right. 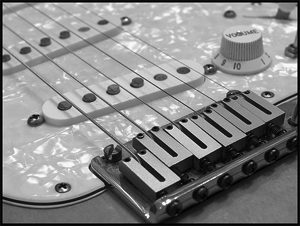 The stratocaster bridge has more elements beneath the bridge than are visible from above. Attached to the bridge and forming an integral part is a tremolo block that fits inside the body of the guitar. The bock forms part of the tremolo system incorporating springs that are attached on the underside of the body. A plastic cover normally covers these. The way in which the screws support and attach the assembly to the body can also be adjusted and this will affect the feel and operation of the tremolo arm and, it is said, the guitar’s tone.

It is pointed out by makers of replacement tremolo blocks such as Callaham that the material from which the block is made will affect the sonic tone of the instrument. The original block used on stratocasters from the USA was made from steel without any lead content, because lead would dampen the tone. A stratocaster made outside of the USA they say is most likely to be fitted with a block made from zinc. They also point out that a block fitted to standard issue American stratocasters is likely to be a soft cast steel block whereas originally it would been made of hot rolled leaded steel which is what Callaham use to make their replacement bridges from. 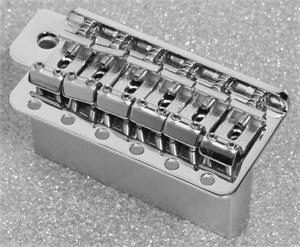 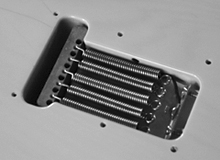 Springs are attached to the block, seen on rear of guitar beneath the cover which has been removed for this picture 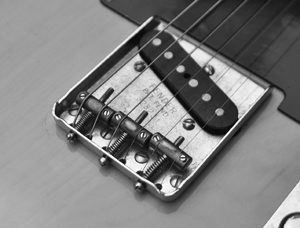 The original Telecaster had three brass saddles of which a newer version is available with six saddles, usually chrome plated on modern guitars. The saddle design has varied a little over the years. Strings are fed through holes from the rear of the body and over the saddle.The ‘ashtray’ liped edge, to which coud be fitted a cover, has been removed on contemporary models such as the one below which is the bridge fitted to the author’s Telecaster Plus model. 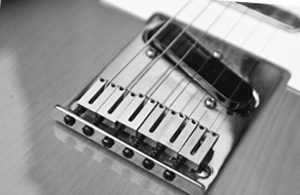 A contemporary bridge version fitted to a Telecaster Plus 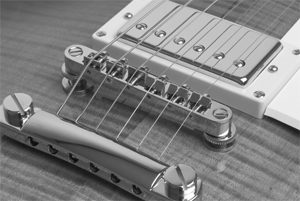 The Tunomatic bridge was design by the president of president of Gibson guitars Ted McCarty. It was first fitted the the Les Paul Custom model, then the Les Paul ‘Gold Top’ standard and other Gibson models thereafter. Wheels at either side of the bridge enable the height to be raised and each saddle is adjustable to accurately affect the intonation of the instrument.

The bridge works with a stop bar tail piece which is securely bolted to the body giving good coupling between string and body, helping to create sustain. Tailpieces do have variations such as this shown to the right on an Epiphone 335 model. 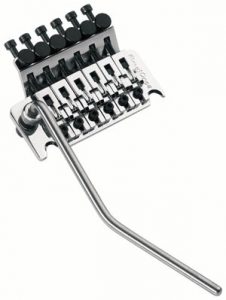 A normal tremolo arm is pushed downwards to affect the pitch of the stings. There is another type of bridge besides standard tremolo bridge, the floating bridge. This enables both a downward and an upward motion, given a more pronounced effect than a standard tremelo bridge. This kind of bridge uses string tension to hold it up, and tension in springs to pull it back. It has to be set up carefully to work well because there needs to be perfect equilibrium between the springs in the back of the guitar and the strings on the front in order to create the desired result and the effect of a ‘floating’ bridge. It is most likely that your guitar would be fitted with such a bridge from the start rather than be fitted subsquently.

There are several makers of floating bridge of which that made by Floyd Rose is a well known example and shown here.

Another form of tremolo fitted to guitars is the Bigsby, shown here fitted to a Les Paul guitar