One way to approach choosing an acoustic guitar is to consider the type of music you want to play. Classical music is played on guitars using nylon strings and contemporary music with steel strings. The apparent difference in tone is consistent also with their difference in design and style. We will begin with guitars designed for use with steel strings.

Shape:
As these guitars have been fashioned over the years, distinct categories have evolved along with a convention for naming them that now provides a useful, and generally consistent, means of classifying a guitars shape, size and character, no matter what the brand name. In order of size, from the smaller to the larger, these will often be referred to as Concert, Auditorium, Dreadnaught and Jumbo which form popuar choices.

These models typically have the following appearance:

Describing the tonal qualities of different guitars in words from which to gain a sense of what the guitar will actually sound like can be difficult. Factors such as resonance, transparency, projection and focus may usefully be spoken of. In very general terms however, the larger bodied guitars will have greater bass in their tone, more ‘resonance’, while the the shallower guitars will sound brighter with a more even bass to treble response, more ‘projection and focus.’ It is not necessarily the case that one shape of guitar suits one particular playing style more than another, whether finger-picking or strumming. You will see guitarists using different models as a matter of personal choice.

The Shape of an acoustic guitar may also have a cutaway feature which provides easier access to the frets nearest the body. The more rounded cutaway is called ‘Venetian’ and the sharper shape called ‘Florentine’.

Body: Back and Sides

A variety of woods are chosen from which different parts of the guitar are made. These too, like shape, will be a factor that has an effect upon tone. The back and the sides of a guitar are usually made of a different wood to the front, most often that is rosewood, of which sustainable and well managed supplies such as East Indian Rosewood are available. Rosewood provides warm bass with sweet, bright treble tones. Other choices include Koa, Mahogany, Walnut, Maple and Cherry. Mahogany, another popular choice for example, is noted for its emphasis of midrange tones and bright, clear treble presence.

Spruce is most often used for the top of the guitar, the soundboard. Among the varities selected, Sitka spruce is often cited as a primary choice while other more economic, and effective versions would include the use of redwoods and cedar. The wood will have been seasoned to remove moisture for stability and in the more costly guitars, the soundboard, and back also, will comprise two halves, each ‘book matched’ to avoid warping iin the event of any shrinkage.

An option, cheaper still for guitars in a lower price range, is to use a laminated, or plywood, soundboard. The ability of such tops to vibrate is restricted in comparison to those made from solid wood. However while the the sound quality is inferior, they nevertheless can provide an instrument to be played and enjoyed.

It is the top of the guitar that has the most significant impact upon the tonal quality of the instrument. For this reason it is not uncommon for acoustic guitars to have a solid top in conjunction with laminated back and sides. This combination can provide a good sounding guitar at reasonable price.

Invisible from view, on the underside of the soundboard, is a pattern of struts and braces that not only give structural support, they actively add their own tonal influence. Individual guitar makers experiment with these to produce an instrument of their own distinction.

One such guitar manufacturer, Martin & Co, developed the “X” frame pattern back in the 1850s. This pattern, which can be either scalloped or not, is typically found in many a standard dreadnought shaped guitar today.

Classical guitars are also known as ‘Spanish’ guitars. The wood chosen for the back, sides and front are actually quite similar to those of a steel strung acoustic guitar, for similar reasons, though with models typical of ‘Flamenco’ music, the preference is to use cedar wood for the top rather than Spruce. The shape of a classical guitar will be fairly consistent though they do vary in size. For very young players, under 13, 3/4 even 1/2 size versions are available.

Most of the major observable differences in specifications between steel strung and nylon strung guitars will be found in the design of the neck and bridge.

Instead of a wooden sound hole, a resonator uses metal cones to amplify the sound. This was originally designed to help the guitar be heard when amid an ensemble of other instruments.

It has a very distinctive sound and often used by blues and bluegrass players. 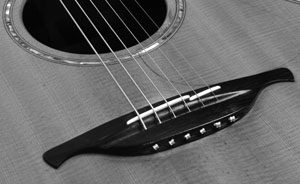 The shape of an acoustic guitar bridge will vary according to its maker. The first key difference to point out is the way in which the strings are fitted to the guitar at the bridge. On a guitar, such as the author’s Lowden shown here, the strings are fed through holes in the body of the bridge itself and then over the ‘saddle’. The ring at the end of a string will secure it in place against the wood of the bridge.

Notice the the saddles can also vary between acoustic guitars. On the Lowden there are two saddles, one for the first 1st and 2nd string, another for the 3rd, 4th, 5th and 6th string. The idea of this to improve intonation that will affect the pitch of notes played along the length of the string.

Note:
The author’s guitar is fitted with a Fishman pickup beneath the saddles and finds that, when amplified, the output volume from the 1st and 2nd strings is fractionally lower than that from the other four strings. Having given the matter review and consideration by an able guitar tech, this is possibly because there is less pressure bearing down from the two thinner strings above. 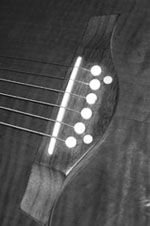 Another type of bridge uses pegs. Steel strings are passed into holes in both the bridge section and the body of the guitar and pegs are then inserted to hold them in place. 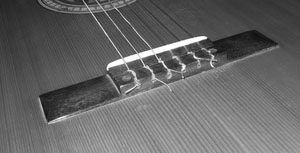 The nylon strings are fed through holes in the bridge
and wrapped around to keep secure.