Steel strung acoustic guitars need strings that deliver essential tones that will be heard directly, not via an amplifier. While it is feasible to use electric guitar strings on an acoustic guitar, and some players do, the sound will not be as vibrant or bright. For this reason bronze wound strings are used on acoustic guitars. They deliver bright, crisp sounding tones, especially when first fitted to the guitar. As the guitar is played over time, this tone grows steadily more blunt however. Bronze is an alloy, a mixture of coper and tin or zinc in a ratio of 80/20. An example of these types of strings would be regular strings by Martin, and the Earthwood series of strings by Ernie Ball.

Another variation of the Bronze wound strings are the Phosphor Bronze strings. These don’t sound quite as bright as mere phosphor ones, they sound warmer, but the idea is that the because there is a small amount of phosphor in the alloy, their tone stays consistent, for longer. Examples can be found made by Martin, such as their Martin Acoustic SP range and those made by D’addario.

The plain, unwound, strings on electric and acoustic guitars are the same.

Nowadays nylon strings are used on classical guitars because of their improved performance in reacting to the effect of the elements such as humidity and they tend to hold their tuning for longer. Quite typically the top three strings of a classical guitar are clear nylon and the lower three, the bass strings, are wound. Clear nylon is the most popular choice for their richness of tone but there is also another version of a nylon string called ‘rectified nylon’ which is a string that has been grounded so that the perimeter of the string is consistent along its length. It is found that this sounds more mellow Black nylon strings are also made which have a greater degree of treble in their tone. The lower three strings are wound either with bronze, referred to as ‘gold’, or wound with silver plated wire, refered to as ‘silver’. Inside the wound strings is a multi-core filament of nylon. 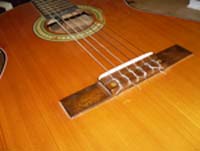 The regular classic guitar strings are straight at both ends, and are to be tied to the guitar at the bridge. So they are not suitable for an acoustic guitar that uses bridge pins to secure the string. There are versions of nylon strings that have a ball end and that can be fitted to other acoustic guitars.

As well as being made from different materials, strings are available in a variety of gauges, width of diameter. Those of a small gauge are normally found easier to play, however the gauge will have an effect on the tone of the guitar. String diameters are measured in thousandths of an inch. The lighter gauges of strings will feel eaiser to play, but the heavy gauges of strings will give more sustain and will sound louder.

Strings sets are available with a range of different gauges, and quoted from the lightest 1st strings to the heaviest sixth string. An example of a very light first string would be a 9 gauge string, this would have a diameter 0.009 inches. Sets of strings typically have different names by their manufactures. By choosing a set of strings you will be able to adjust the treble of the high strings and deepness and warmth in the bass of the lower strings to suit your taste as well as to find the set of strings you feel most comfortable with when playing. Often the guitar set we use is denoted by the gauge of the first string. So for example, and guitarist may be said to use a set of 10s or 11s. Electric guitar gauges usually start between 8 to 12 gauge, most popular being 9 and 10 gauge, and acoustic guitars 10 – 13 with a 12 gauge considered ‘light’ on an acoustic guitar, while considered ‘heavy’ for an electric guitar.

The scale length of the guitar will also have a bearing upon how the strings feel to play. A Gibson type of guitar, for example, is of shorter scale length than a Fender styled guitar. This means that the strings will be at differnt tensions when tuned on either of the guitars. Heavy gauge strings will feel slacker on the shorter scale guitar than if fitted to a Fender style guitar and visa versa.

Nylon strings are classified not so much by their gauge as their tension, such as “extra low” tension to “extra high” tension.